Some players have been involved for decades, others for a much shorter time, but everyone brings a dedication and an enthusiasm to playing in and performing with the orchestra that makes it such a formidable and successful musical tour de force. 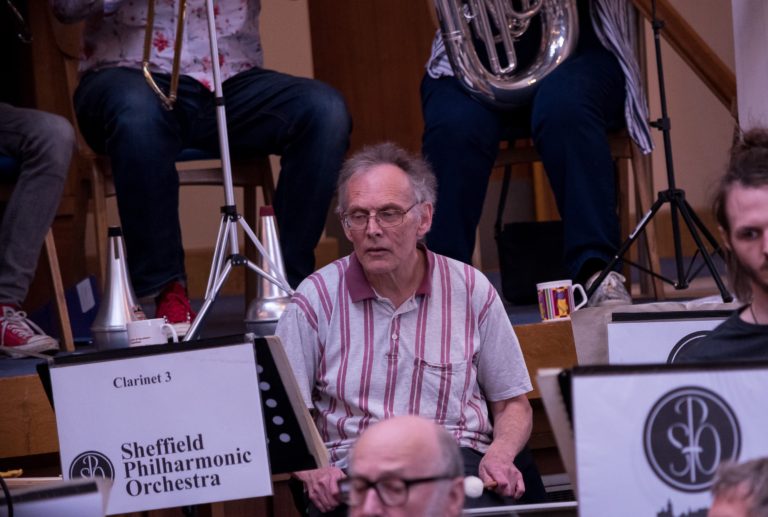 I have enjoyed orchestral music since my childhood and I remember well buying and being given recordings of music including an old Toscanini recording of Beethoven’s 7th Symphony.  Later on I started to collect LPs and play them on my parents’ Ultra radiogram.
At 14 I started piano lessons, but my lessons stopped when I moved to City College in Sheffield at 18.  I was 27 when I re-started both piano and organ lessons.  I did not reach a high standard, but enjoyed what I did.  It was some years later that our son John started to work his way through the Sheffield Music Services system, and eventually joined the City of Sheffield Festival Band as a percussionist (on timpani).

At this point most of the Band’s percussion players had left for university leaving John on his own.  As I used to take John to rehearsals, the Band’s conductor Clive Scott asked me if I would like to ‘have a go’ and help out, which I decided to do.  I had a lot to learn... not only how to actually play timps but also how to count the rest bars, and play for a conductor... and all at the ripe old age of 48!
After a number of years with the Festival Band connections started to develop with the SPO.  Sometime later John Pearson (our then conductor) offered me the opportunity to play timps for Vaughan Williams’ London Symphony and I seized the opportunity!  I started to play on a regular basis and it wasn’t long before the Orchestra purchased its set of Majestic Harmonic pedal timps.
Now aged 72, I’ve been playing with the SPO for 17/18 years and have played some wonderful music and had a great time.  I never thought I would play in an orchestra, but it is amazing what can happen sometimes!  I will always be grateful to Clive Scott and John Pearson for giving me the opportunities to progress, and making my orchestral ambitions become reality. 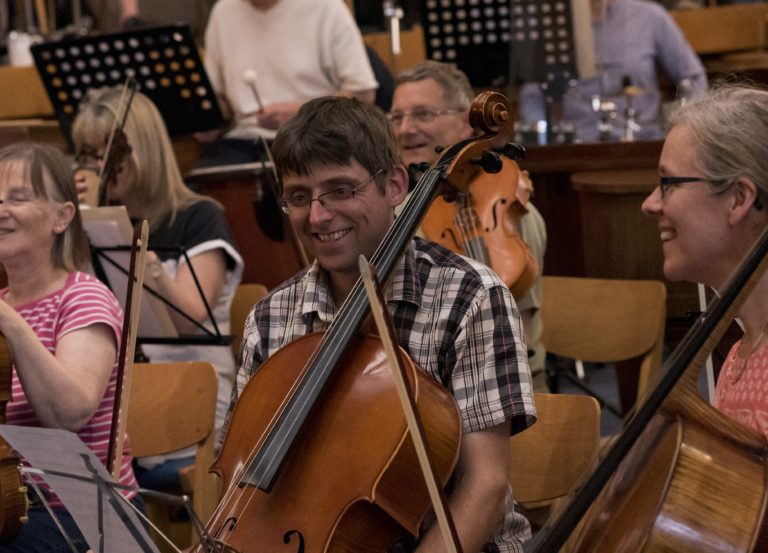 Usually you can spot me somewhere in the cello section.  My first cello lesson was in January 1990 in a music school in Uden, the Netherlands.  A couple of years later I joined the Meierijs Kamerorkest Orchestra (MKO) in the nearby town of Schijndel.  Like the SPO, the MKO was an amateur orchestra that did not shy away from the more challenging symphonies (Bruckner 4 comes to mind).  With the MKO I spent many rehearsal weeks in a youth hostel near Ieper in Belgium, and we performed at the 2000 European Youth Music Festival in Trondheim, Norway.

In 2005 I moved to Sheffield to pursue a PhD in the Anthropology of Childhood, and the same year I joined the SPO.   I was back in the Netherlands and Belgium between 2007-2010 for my PhD fieldwork, but since late 2010 I’ve been back in Sheffield and back with the SPO.  That first rehearsal felt as if I hadn’t been away at all, and a couple of years later I found myself leading the cello section through a Pirates of the Caribbean medley at a Christmas Concert.
After graduating I landed a job with the University of Sheffield’s Department for Development, Alumni Relations & Events.  When I’m not at work, doodling around in the SPO’s cello section, or helping Ted with putting the timps away, you can find me either on the yard looking after my own horse, or at Whirlow Hall Farm where I help with pony riding for children who visit the farm with school, and volunteer as weekend tour guide. 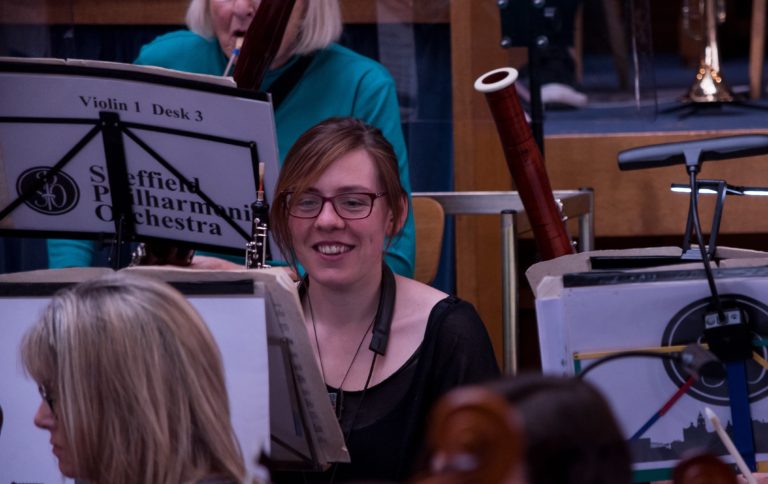 I’ve been playing oboe with the SPO since about 2010, originally coming in as a ‘bumper’ and then taking on the cor anglais / 3rd oboe role until late 2017, at which point I was offered the opportunity to take over as principal oboe.
I started playing orchestrally as a youngster growing up in Wales.  As there were so few school-age oboists in our county I had a lot of (mostly terrifying) opportunities from a very early age, including a European tour performing Mahler V when I was 14 (and about Grade 4 standard).  Things I learnt on that tour: 1) Mahler V is DEFINITELY not a Grade 4 piece and 2) If in doubt, only play when the brass are fff!  Being thrown in the deep end didn’t put me off though, and music has been an integral part of my life ever since. 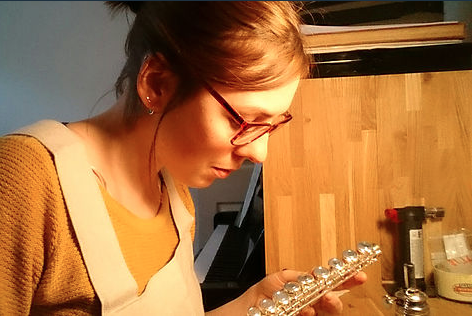 In 2006 I moved to Sheffield to study Music at university, fell in love with the city and have never looked back!  After graduating from my postgraduate degree in 2010 I went back to college to study for a diploma in Woodwind Instrument Making & Repair and I now run my own woodwind repair business in Walkley.  I’ve absolutely loved being involved with the SPO over the years; they’re a wonderfully friendly, welcoming group who play a brilliant range of music to appeal to players and audiences alike.  I particularly love the opportunity to get my teeth into the bigger symphonic works, and really enjoyed working on Rachmaninov’s Symphony No.2 in June 2017. 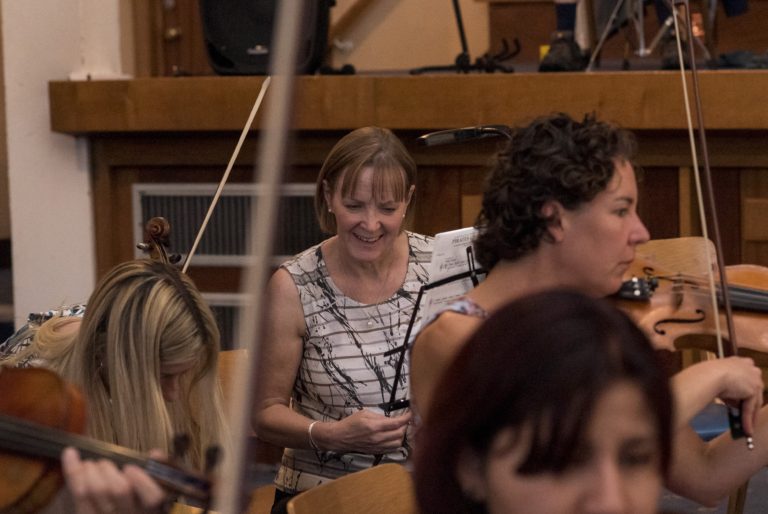 I first started playing the violin in junior school.  Why the violin?  Well, the oboe had been chosen by someone else, and my older sister didn't want me to play the same instrument as she did! (she went on to become a great clarinet player and music teacher)
As a science student I played a little at university with real music students and learned a lot.  It's a great way to make friends when you move away from home.  Many years later, music is still a great way to meet people and I've made some important friendships.  Whether it's taking my fiddle to play a few tunes in the pub, meeting with others to sing a few songs or playing in orchestras.

I think that I first played with SPO in 1987.  We used to rehearse on Sunday mornings in the City Hall and perform concerts there with a range of soloists; some professional and some students.  Since then the orchestra has moved to various rehearsal venues with different conductors and has performed in a range of great venues in Sheffield and further afield.  One of my favourite memories is a summer school where we rehearsed and performed Beethoven’s Eroica in Durham Cathedral.  What a sound!
I recall when I joined, one of the original members explaining the purpose of the Orchestra as being about giving amateur players the chance to enjoy playing together to improve their skills and bring music to the community.  I hope that the founder would still recognise the orchestra meeting his aims from the friendships and welcome that you'll find. 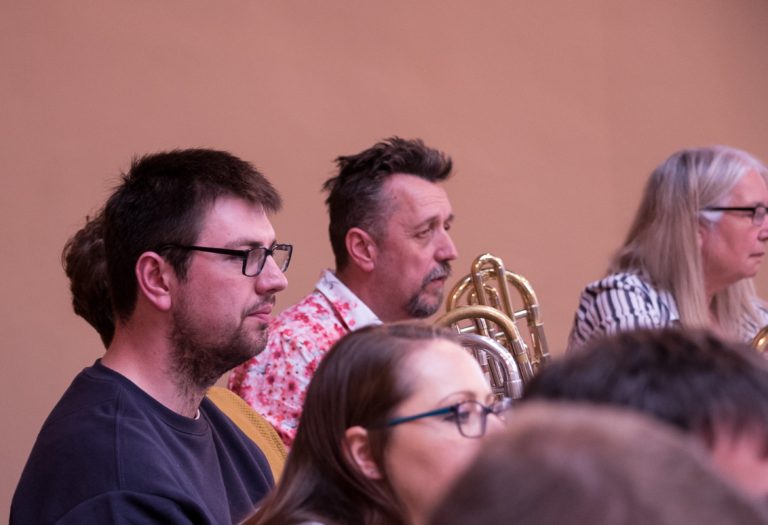 I currently play Bass Trombone in the SPO, or I guess more accurately 3rd Trombone.  In any case it's the big trombone.  And heavy.  And loud (but that last bit's probably my fault).  I joined the Orchestra actually playing an even larger brass instrument, the Tuba.  It's also very heavy and when I play it, loud too. I don't know why...
I've been playing the Tuba since I was a kid.  They handed out instruments alphabetically at school and it was the only one left in the cupboard by the time they got to Yoxall.  I moved onto trombone when I realised that Albert Aardvark wasn't playing piccolo and the instrument you played wasn't based on family history. 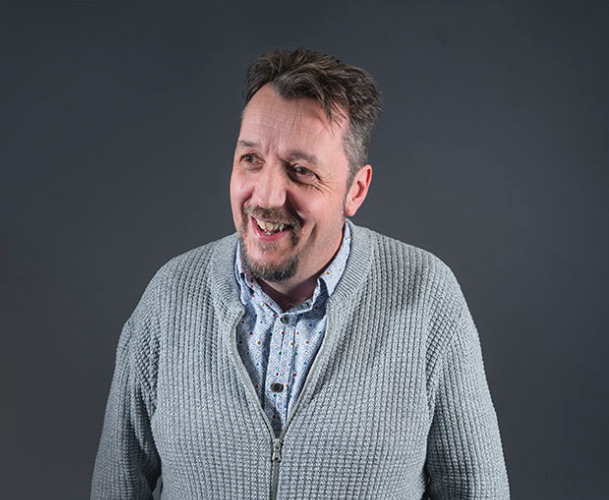 I've been lucky enough to play in a wide range of ensembles.  I started out in brass bands in and around Manchester and my orchestral link there is an early memory of playing at the Free Trade Hall, walking out as a 12 year old to play on a stage where John Barbirolli once stood.  If you want to do that now you'd probably get arrested for being in someone's bathroom as they turned it into a hotel a number of years ago.
Not every building I've been involved with musically has been knocked down or turned into a hotel though (although sadly many pubs I've played in have long gone).  I was however lucky enough to play Tuba in a New Orleans jazz band and played for the Queen at the opening of the Winter Gardens in Sheffield.  My overriding memory is "Isn't she short?" I don't know what she thought of me though but I can probably guess, "Isn't that Tuba a bit loud?"
Playing trombone in the SPO is and has been a lot of fun, playing a real range of pieces and concerts.  It was a real highlight to have performed Bruckner's 7th this autumn and I enjoyed it immensely. I can't think why.

Want to join the team? The SPO is a friendly, welcoming and ambitious orchestra. We Rehearse on Tuesday evenings during term time (7.30-9.45pm) in the heart of the City Centre at the beautiful Victoria Hall (adjacent to the Crucible Theatre). The SPO are committed to playing a broad repertoire of music and putting on high quality, well attended concerts that engage and entertain regular concert goers and the local community.  We currently have Violin, Viola, Double Bass and Percussion vacancies. If you're interested in playing with us get in touch via our Contact Us page.