Established in 1945 by its founder and Musical Director, Hermann Lindars, the Sheffield Philharmonic Orchestra [SPO] has been making music in the Steel City for over 70 years.  Starting life as the 'Sheffield Amateur Symphony Orchestra’ in 1945, the SPO prides itself on its rich musical history, as well as its core ethos of providing a medium for local musicians to flourish.

Based in the cultural heart of the City of Sheffield at the Victoria Hall, the SPO draws on players of all backgrounds from across Yorkshire & the Humber, Lincolnshire and Derbyshire.  The Orchestra has a busy schedule and gives no fewer than five concerts a year across Sheffield and beyond. Over the years the SPO has performed in many notable venues, such as: Sheffield City Hall, Buxton Pavilion Gardens and Birmingham Symphony Hall, where they recorded a live CD with revered acoustic and electric guitarist, Gordon Giltrap MBE.  The Orchestra have also performed at music festivals on the islands of Crete, Malta and Sardinia.

The SPO have accompanied a number of internationally-acclaimed soloists, such as: Benjamin Frith and Rohan da Saram, and they are particularly looking forward to working with violinist, Fenella Humphreys (Winner of the 2018 BBC Music Magazine Instrumental Award) in March 2020.  Further to this, the SPO are committed to supporting local talent across South Yorkshire; many of its younger members have gone on to study at leading UK Conservatoires, and they regularly commission and perform new works by local composers and arrangers. 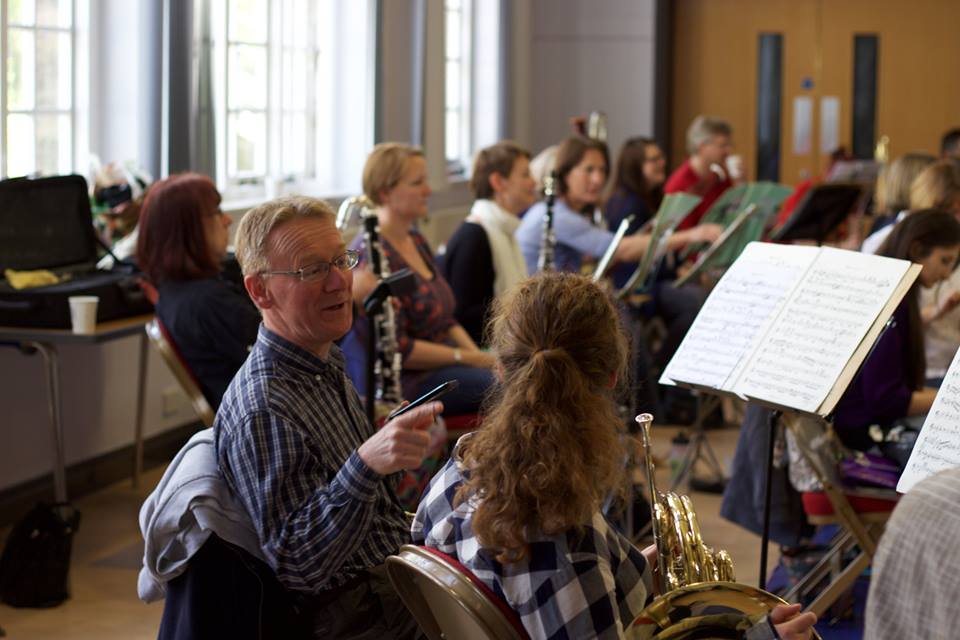 The SPO gave its first public performance on Sunday the 22nd of April 1945 in Sheffield City Hall under the baton of Hermann Lindars, who founded of the orchestra.  The audience included the Lord and Lady Mayoress of Sheffield and the Master and Mistress Cutler, Lord and Lady Riverdale.  At the time the orchestra was known as the 'Sheffield Amateur Symphony Orchestra' but a year or so later it was incorporated into the Philharmonic Concerts Department of the Sheffield Corporation, taking on the name by which it is known today.

Over the next forty years, the SPO gave concerts regularly at the City Hall, performing with distinguished soloists and guest conductors.  During the 1980s the orchestra played concerts in St. Johns Church (Ranmoor), Beverley Minster, St Marie’s Catholic Cathedral, The Octagon Centre and Buxton Pavilion Gardens.  Family concerts were usually given once a year in the City Hall with well-known personalities such as Johnny Morris and Anthony Hopkins.

Following a few years of decline, the orchestra began rebuilding its membership and prestige under the baton of Andrew Lucas and its fortunes were further revived when John Pearson took on the role of Musical Director.  Membership continued to increase and the quality of performance improved, and it was during this period that the Orchestra played a highly successful concert in Birmingham Symphony Hall featuring the music of folk guitar virtuoso, Gordon Giltrap, followed by a commercial recording of his symphonic work, The Eye of the Wind.  When John left, his good work was continued under the charismatic leadership of Polish-born, Ewa Strusinska (then deputy conductor of the Halle Orchestra).  For three years she coaxed ever-improving performances from our players and introduced them to a challenging new repertoire, which continued under the batons of our most recent Musical Directors; the supremely talented RNCM graduate, Jonathan Lo who took us until 2016, and the wonderful Jack Lovell (RWCMD) who sadly left us in 2018. 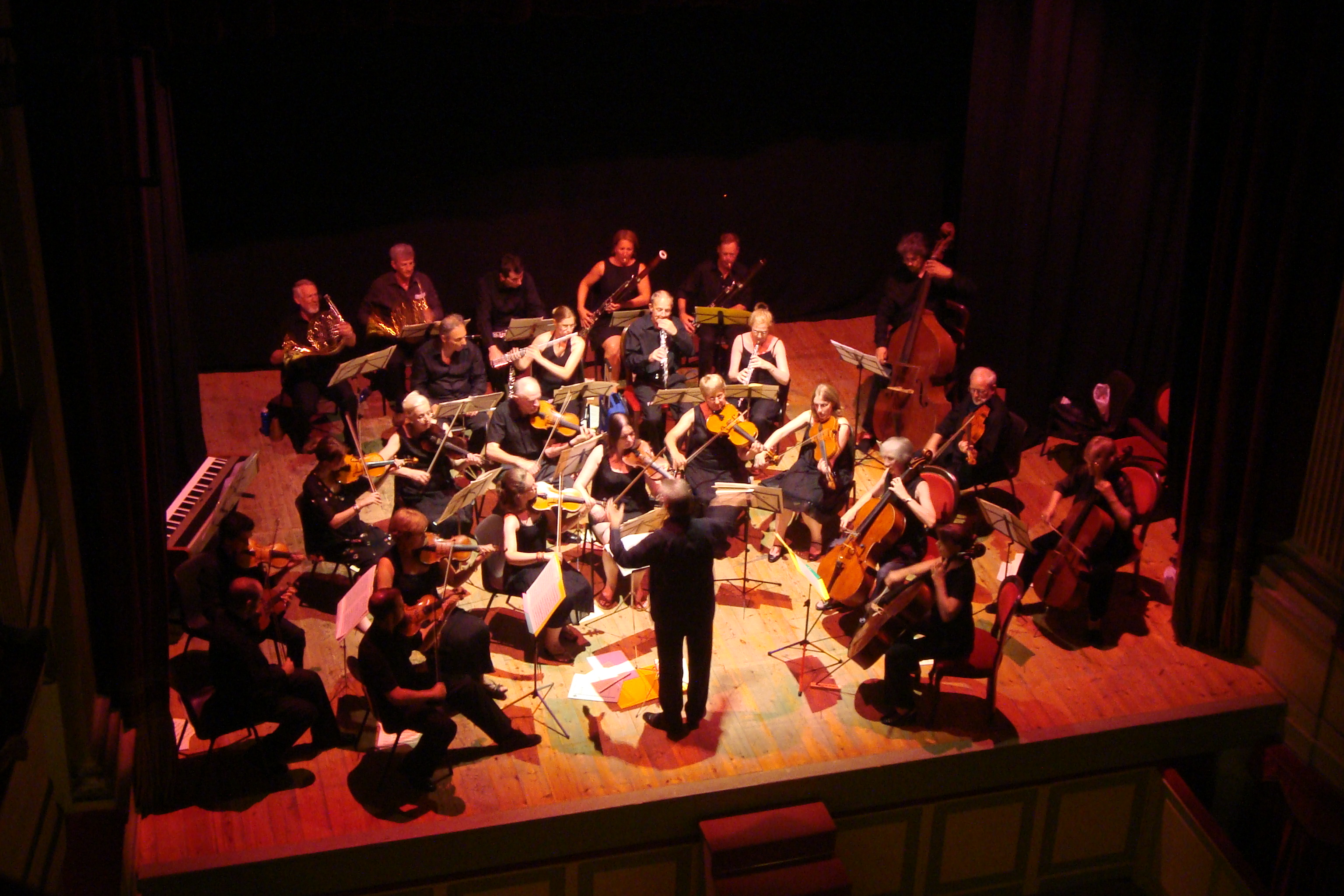 The orchestra’s ethos and spirit has always remained the same; providing a medium for amateur players of all ages and backgrounds to flourish.  The orchestra’s policy has always been to play music selected to suit both the concert goer and player, and it is also a priority of the orchestra to help, support and encourage Sheffield musicians in their development.  Local soloists have included violinists Melody Cooper, Scott Cooper, and Martin Cropper, harpist Rhodri Davis, and more established figures such as, Rohan da Saram, Fenella Humphries and Benjamin Frith.

In the summer of 2000, the orchestra was invited to take part in a music festival in Heraklion in Crete and gave three concerts there.  The Orchestra travelled to Malta for the summer of 2003 and performed a series of concerts on the main island, and at the Victoria festival in Gozo.  2007 saw another successful concert tour to the island of Sardinia, as guests of the Istituto Musicale Giuseppe Verdi.  A fertile partnership with the Italian baritone, Antonello Arca, was fostered during this tour, and he has sung three times with the orchestra since.

We use cookies on our website to give you the most relevant experience by remembering your preferences and repeat visits. By clicking “Accept All”, you consent to the use of ALL the cookies. However, you may visit "Cookie Settings" to provide a controlled consent.
Cookie SettingsAccept All
Manage consent

This website uses cookies to improve your experience while you navigate through the website. Out of these, the cookies that are categorized as necessary are stored on your browser as they are essential for the working of basic functionalities of the website. We also use third-party cookies that help us analyze and understand how you use this website. These cookies will be stored in your browser only with your consent. You also have the option to opt-out of these cookies. But opting out of some of these cookies may affect your browsing experience.
Necessary Always Enabled
Necessary cookies are absolutely essential for the website to function properly. These cookies ensure basic functionalities and security features of the website, anonymously.
Functional
Functional cookies help to perform certain functionalities like sharing the content of the website on social media platforms, collect feedbacks, and other third-party features.
Performance
Performance cookies are used to understand and analyze the key performance indexes of the website which helps in delivering a better user experience for the visitors.
Analytics
Analytical cookies are used to understand how visitors interact with the website. These cookies help provide information on metrics the number of visitors, bounce rate, traffic source, etc.
Advertisement
Advertisement cookies are used to provide visitors with relevant ads and marketing campaigns. These cookies track visitors across websites and collect information to provide customized ads.
Others
Other uncategorized cookies are those that are being analyzed and have not been classified into a category as yet.
SAVE & ACCEPT
MENU